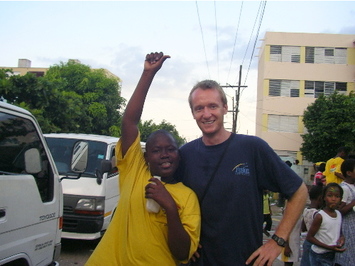 Fusion Jamaica was founded by a Brit living in Jamaica after he met an Australian, at a conference in Greece, who introduced him to a network of youth and community workers from several other countries!

The Brit is David Campbell, who first arrived in Jamaica in May 1994, when he was aged 17 and had just run away from school. He first worked as a volunteer for Mustard Seed communities, looking after disabled children and seeing first-hand some of the challenges of inner city life in Kingston. In his first month in Jamaica he had his pockets picked twice, was held up and robbed at knife point twice and had the police run past him shooting at a criminal.

Over the course of a year spent in Jamaica at that time, he was confronted with the needs of young people in inner-city communities in Kingston, so after 4 years back in England he decided to return to Jamaica to do what he could to help.

He started a basketball programme, using the sport to teach young people positive values for their lives, and built 3 basketball courts in Rema and Arnette Gardens. In 2001 he rode a 3-person bicycle across the USA (from Florida to Los Angeles) to raise money to build a community centre in Trench Town. This project did not work out and with a combination of other projects failing at the same time and he struggled through a battle with depression.
In 2003 he went into a business partnership running a health food restaurant, in order to help fund the community work in West Kingston and provide employment for some people from these communities. The same year he went with some other Jamaican delegates to the Sports Ministry Conference in Athens, Greece, which was when he met the Australian, Marty Woods, who worked in the UK, under an Australian-based charity named Fusion. David was fascinated by the method of working with young people at risk in some tough communities that Fusion was using, so he began to use and adapt this method with his work in West Kingston.

In 2004 he attended a training course to equip people for ministry called “Foundations”, which was run by Fusion in Australia. While there he met Liz Garvin (now Liz Campbell) and they were married in January 2006. She came to live with him in Trench Town, and continues to work alongside him in Fusion Jamaica, which they established together. David withdrew from the business at this time, to focus more on setting up Fusion in Jamaica.

Fusion’s work continues in West Kingston through a team of volunteers that has built up over the years since. This team runs weekly after school clubs for children, clubs for young people, youth and family day trips, youth mentoring programmes and community celebrations that help bring the community together. Fusion mainly works in Trench Town and Denham Town, and has supported community development work in Rose Town, Tivoli Gardens, Majesty Gardens and Maverley among other communities.